The Cowboys dangled Tarell Basham in trades before the deadline, despite the veteran pass rusher being on IR at the time. No takers emerged. Nearly a month later, Dallas will still move on.

Dallas is waiving Basham on Tuesday, Tom Pelissero of NFL.com tweets. Basham is attached to a two-year, $5.5MM deal agreed to in 2021. Less than $700K remains on that deal, potentially opening the door to a claim. Mike McCarthy said this transaction came about because of a roster crunch, ESPN.com’s Todd Archer tweets, with the team needing to clear space for Tyron Smith and James Washington eventually. 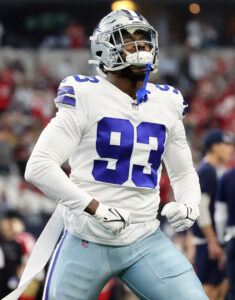 Although the Cowboys used one of their injury activations on Basham this season, he has not seen much action since returning. Basham played eight defensive snaps against the Packers in Week 10; he has not been active for any other game since the Cowboys moved him off IR. The Cowboys have assembled a deep pass-rushing contingent, leaving less work available for Basham, who collected seven sacks between the 2020 and ’21 seasons.

This move follows the Cowboys’ decision to cut defensive tackle Trysten Hill shortly after the trade deadline. The team shopped both Basham and Hill during the season. The Cardinals claimed Hill’s rookie deal; Basham being tied to veteran money complicates his status to some degree.

A third-round pick in Chris Ballard‘s first Colts draft, Basham did not last too long in Indianapolis. The Colts moved on in 2018, but the Jets came in with a waiver claim in October 2018. Basham spent the next three seasons in New York. He created a bit of a market for himself in his 2020 contract year, forcing three fumbles and tallying 3.5 sacks. The Cowboys added him to new DC Dan Quinn‘s stable up front and used him as a six-game starter in 2021, when both DeMarcus Lawrence and Randy Gregory missed time due to injury.

This year, however, the Cowboys bought in bulk up front. Gregory’s 11th-hour decision to spurn the Cowboys led the team to re-sign Dorance Armstrong, add Dante Fowler in free agency and draft Sam Williams in Round 2. With Lawrence going through a much healthier season, Dallas did not have much room for Basham. The sixth-year defender spent much of his season on IR after a Week 1 quadriceps injury but is healthy now.