The Browns entered the season with high expectations for their defensive front, but the interior of the unit has been underwhelming to date. One target of criticism has been rookie defensive tackle Perrion Winfrey, who has been in and out of the lineup this season. 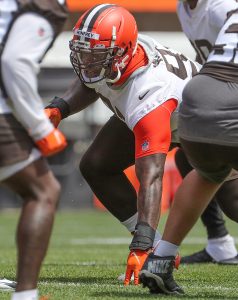 Winfrey’s most recent absence was last week, when he missed Cleveland’s loss to the Bills as a result of a head injury which landed him in concussion protocol. Providing more details on the matter, he said that a scooter accident was the cause of the injury, adding to his reasons for missed time in his debut season.

“I was driving around and just ran into a pole,” the 22-year-old said, via Mary Kay Cabot of cleveland.com. “Nothing crazy. I looked back to try to see if my friend was still behind me, and when I looked back I ran into the pole. Just things I’ve got to get over as a rookie. Little things here and there.”

After an impressive college career at Oklahoma, Winfrey was lauded in the build-up to the draft for his ability as a pass-rush presence in particular. He landed in Cleveland in the fourth round, and had an opportunity to carve out a role alongside the likes of Jordan Elliott, Taven Bryan and Tommy Togiai. Instead, he has struggled to get on the field, beginning with a disciplinary matter which saw him sit out in Week 2.

The 6-4, 292-pounder has also been absent as a healthy scratch and after missing time due to illness recently. Overall, he has played just 119 snaps this season, making five tackles (including one for loss). His PFF evaluation shows promise as a disruptive presence against the pass, but an overall grade of 45.6 leaves much to be desired. That has contributed in part to the team’s overall struggles in the middle, which has led to a belief that significant moves could be made in the offseason at the position.

Winfrey was cleared from the protocol on Friday, where he was a limited participant in practice. That leaves his game status up in the air for tomorrow’s contest against the Buccaneers, where the Browns will look to make up ground in the AFC Wild Card chase amidst a disappointing campaign.