With most college football players having only bowl games remaining on their schedules, many are beginning to declare for this spring’s draft. One notable member of that group announced on Monday that he will forego his remaining eligibility despite being a member of a playoff-bound team. 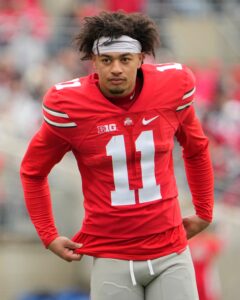 Ohio State’s Jaxon Smith-Njigba has declared for the NFL draft, citing the fact that he will not be healthy in time to play in the Buckeyes’ upcoming CFP semifinal against Georgia. The decision confirms that injuries suffered in 2022 will limit his contributions to just three games and five receptions this season.

“I want to be out there competing with my brothers more than anything,” the junior said, via ESPN’s Pete Thamel. “The decision to turn pro was made after I was unable to come back on multiple occasions during the season and the doctors determined I would be unable to participate in the playoffs.”

The 6-0, 197-pounder had a modest freshman year, recording just 10 catches. His production the following year, however, made him one of the most celebrated WR prospects in the country. He set a new Big Ten record with 1,606 receiving yards, which came off of a team-leading 95 receptions. Smith-Njigba added nine touchdowns along the way.

Of note amidst those numbers, of course, is the fact that he was able to compile them on a team which also featured eventual first-rounders Garrett Wilson and Chris Olave. Their departures led to sky-high expectations this season, but a lingering hamstring injury kept Smith-Njigba sidelined for most of the campaign. While that could hurt his draft stock, the decision by the Lions last spring to trade up and select Jameson Williams in spite of his ACL tear is a recent example of an NFL team being willing to accept the risk associated with an elite talent.

For Smith-Njigba (who is aiming to recover in time to participate in the Combine), that means he is still expected to hear his name called on Day 1 of the draft, something which will once again accompany significant expectations. Ohio State, meanwhile, will need to continue leaning heavily on sophomore phenom Marvin Harrison Jr. in the passing game when they look to upset Georgia.