Rumors of Vance Joseph being on the radar for a promotion in Arizona circulated last week, and the Cardinals are indeed interested in seeing what their defensive coordinator could provide the team as a head coach. 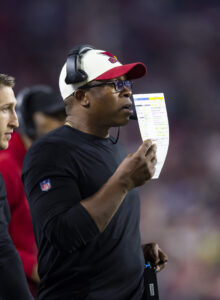 The Cardinals plan to interview Joseph for their HC job next week, according to ESPN.com’s Jeremy Fowler (on Twitter). Joseph, who has been Arizona’s DC since the team hired Kliff Kingsbury in 2019, has been an interviewee elsewhere since being fired as the Broncos’ HC following the 2018 season.

Although the Cardinals have a history of promoting from within at their GM position — a blueprint that may still be in place — the team has reached outside the organization for its head coaches. That common path has included mostly offense-based HCs this century. The Cardinals have gone offense (Kingsbury, Bruce Arians, Ken Whisenhunt and Dennis Green) with four of their past five HC hires. Only Steve Wilks, whom the team made a one-and-done after the 2018 season, came from the defensive side of the ball over the past 19 years.

Joseph, 50, is well-liked in the Cardinals’ building and, Kingsbury ties aside, may be one of the frontrunners for the position. Of course, Joseph almost certainly would not outflank Sean Payton. The Saints granted the Cards permission to interview Payton on Wednesday, generating intrigue regarding this year’s hottest coaching free agent. But the team will explore its options, as Payton is far from a lock to agree to terms with Arizona.

After helming back-to-back double-digit loss seasons in Denver, Joseph oversaw a last-ranked Arizona defense in 2019. The team showed considerable improvement in 2020 and ’21, however, ranking in the top 13 in both points and yardage in each campaign. This year’s Cards defense regressed, ranking 31st in points per game allowed (26.4) and slotting 24th in DVOA.

Michael Bidwill said he hopes to replace Steve Keim before landing on a head coach. A host of GM candidates have emerged for the team, including in-house staffers Quentin Harris and Adrian Wilson. In the wake of Keim stepping away from the team, Harris and Wilson shared his responsibilities. It would be interesting to see if the Cardinals, given the turbulent year they just had, would legitimately consider an in-house GM and a holdover HC.

5 comments on “Cardinals To Interview Vance Joseph For HC Job”