The Falcons have reportedly hit a roadblock with their first target to take on their vacant defensive coordinator position. Two new names have quickly emerged as candidates the team is interested in meeting with, however. 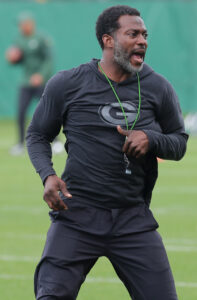 Atlanta has put in an interview request with Packers defensive backs coach and passing game coordinator Jerry Gray, per Benjamin Albright of KOA Colorado (Twitter link). A sit-down is expected to take place next week, Albright adds. That news comes as little surprise, given the fact that Gray was quickly named as a candidate to replace Falcons DC Dean Pees following his retirement announcement.

Gray, 60, has NFL coaching experience dating back to 1997. His time on the sidelines at the pro level began in Tennessee, and includes a stint as the Bills’ DC from 2001-05. Gray ultimately found himself back with the Titans in 2011, when he took charge of their defense. His unit put up generally sub-par numbers during his time in Nashville, aside from his first year in charge where the team’s defense ranked eighth in scoring.

In addition, the Falcons have their eyes on the Saints’ Ryan Nielsen, Bruce Feldman of The Athletic tweets. The 43-year-old has exclusively worked with New Orleans during his time as an NFL staffer, beginning with the team in 2017. He spent five years working strictly with the defensive line, before being promoted to the role of co-DC this past offseason.

That move was necessitated by Dennis Allen being promoted to New Orleans’ head coach, of course, and increased Nielson’s importance (along with that of Kris Richard) to the Saints’ defense. The unit delivered a strong performance in 2022, ranking fifth in the league in yards allowed and ninth in scoring. That wasn’t enough to guide the Saints to a postseason berth given their offensive struggles, but it likely boosted Nielson’s stock as a high-end coordinator candidate.

Either option would bring significant experience to the rebuilding Falcons’ defense, so they could be serious candidates for the job. Atlanta is expected to cast a wide net in their search for Pees’ successor, however, so their list of interviewees is likely to grow in the coming days.