The Titans are one of several teams currently in need of a new offensive coordinator. Their ultimate decision with respect to replacing Todd Downing may not take them outside of the organization, however. 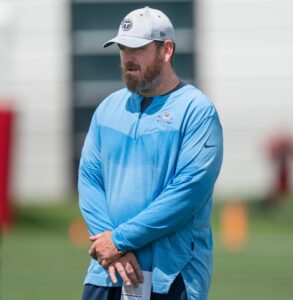 Tennessee has met with passing game coordinator Tim Kelly to discuss their OC position, ESPN’s Jeremy Fowler tweets. The 36-year-old has been an NFL coach since 2014, when he joined the Texans’ staff. Three years, later he took on the title of tight ends coach, one which he held for a pair of seasons. In 2019, Houston promoted him to offensive coordinator.

The Texans put up middling numbers during Kelly’s first two seasons at the helm. They ranked 13th in the NFL in yardage over that span, finishing 14th, then 18th in scoring. During the 2021 coaching cycle, the Texans denied requests from outside teams interested in interviewing him, showcasing their interest in retaining him. However, the 2021 season (during which quarterback Deshaun Watson sat out amidst his trade request) saw the team plummet to last in the league in yardage and 30th in scoring.

That led to Kelly’s intra-divisional move this past offseason, where he joined the Titans as an offensive assistant under Downing. Tennessee averaged only 171 yards per game through the air, the third-worst figure in the league this year. Injuries to quarterback Ryan Tannehill and the team’s lack of established wideouts certainly contributed to their underwhelming totals and to Downing’s firing. Regardless, Fowler notes that Kelly represents the “strongest in-house candidate” for the OC position.

On the other side of the ball, the Titans have requested an interview with Commanders staffer Chris Harris (Twitter link via Fowler). The former All-Pro safety began his coaching career in Chicago immediately after hanging up his cleats. He spent two seasons with the Bears, followed by four years with the Chargers as their assistant DBs coach. He took a promotion coaching the same position in Washington in 2020, and has remained there since.

Fowler adds that a potential Titans hire would likely come with the title of passing game coordinator in addition to Harris’ current capacity coaching in the secondary. The 40-year-old could also garner interest as a defensive coordinator, however, as he looks to continue his career ascension on the sidelines.