WEDNESDAY, 4:35pm: The Titans and Jurrell Casey have agreed to a contract extension that will keep the defensive lineman in Tennessee beyond the coming year, according to agent Drew Rosenhaus, who tweeted a photo of Casey signing the deal. Per Mike Florio of Pro Football Talk (via Twitter), it’s a four-year extension worth $36MM, with $20.5MM in guarantees. However, it’s not clear how much of that $20.5MM is fully guaranteed. 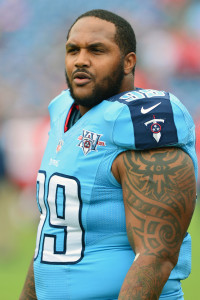 “We are excited to come to an agreement on an extension with Jurrell,” said Titans GM Ruston Webster in a press release confirming the deal. “This is something Jurrell has earned not only with his play on the field but his work ethic as well. We appreciate Jurrell’s professionalism through this process and look forward to many good years to come.”

Casey, 24, is coming off a breakout season in which he compiled 10.5 sacks and 55 tackles, ranking fourth among 69 qualified defensive tackles, per Pro Football Focus’ advanced metrics (subscription required). Casey’s pass-rushing grades placed him behind only Gerald McCoy and Ndamukong Suh as an interior rusher, as he racked up 54 quarterback pressures for the season.

Not coincidentally, Suh and McCoy are the league’s top two highest-paid defensive tackles by per-year salary, so the Titans did well to lock up their star lineman for less than $10MM per year. Suh and McCoy are making average annual salaries of $12.9MM and $11MM respectively on their current pacts.

2014 was set to be the final year of Casey’s rookie contract, which paid him $1.431MM for the coming season. Based on the reported numbers on his extension, Casey should now be locked up through the 2018 season, and he should become Tennessee’s highest-paid player by annual salary, at $9MM per year. Jason McCourty‘s $8.6MM average per-year salary had previous been the top figure on the Titans’ books.

Locking up Casey had been a priority for the Titans this summer, with reports dating back to early June suggesting extension talks were underway between the two sides. Jim Wyatt of the Tennessean reported yesterday that Rosenhaus was in Tennessee to negotiate a deal for Casey in person, which was viewed as a positive sign. It appears as if Rosenhaus and the Titans were able to put the finishing touches on the new deal during that face-to-face meeting.