FRIDAY, 8:49am: The Browns have officially confirmed the hiring of Horton as the team’s defensive coordinator, along with the other moves noted below and a few more. Here’s the full list of coaches and titles announced today by the team:

WEDNESDAY, 7:32pm: In addition to naming Saunders, Hamilton and Wilson to his offensive staff, Jackson has hired Hal Hunter as his O-line coach, Breer tweets. Hunter had been the Colts’ assistant O-line coach since 2013. He was at the helm of the Chargers’ line from 2006-12.

Additionally, the Browns have addressed their offensive staff by hiring Al Saunders as a senior assistant, according to Cabot (Twitter link), Pep Hamilton as assistant head coach/offense and Kirby Wilson as their running game coordinator (Twitter links via ESPN’s Josina Anderson).

The last few days have been a whirlwind for Horton, who appeared likely to join the Browns before a report came out that he was negotiating a contract extension with the Titans – whose defensive he coordinated over 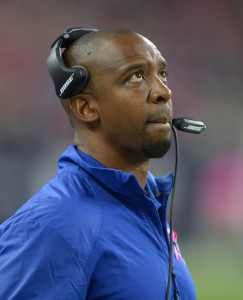 the last two seasons. However, the extension didn’t come to fruition and Horton interviewed with the Browns to become their new D-coordinator on Tuesday. Horton is familiar with Cleveland, having coordinated its defense to a top 10 ranking in 2013. Before that, he worked in the same capacity in Arizona from 2011-12. Horton’s defense in Tennessee finished 12th overall in 2015-16, but the team seemingly marginalized his role in the offseason when it hired Dick LeBeau as an assistant head coach. LeBeau was given “complete control” of the defense, and Horton had to report to him during the season as a result. Horton has already put in requests to bring some of the Titans’ defensive coaches to Cleveland, according to Cabot (Twitter link), as he tries to improve a Browns ‘D’ that finished 27th in the league in 2015-16.

Jackson and Saunders have a working relationship that dates back to the 2009 season, when both were with the Ravens. Saunders was also on Jackson’s staff when Jackson was the Raiders’ head coach in 2011. This is the fourth decade in which Saunders has worked as an offensive assistant at the NFL level. The 68-year-old spent this season on the Dolphins’ staff and has been an offensive coordinator with four different teams. While the Browns will value Saunders’ input, Jackson will call the plays.

Hamilton was the Colts’ O-coordinator from 2013 until this past November, when they fired him after their third-ranked attack in 2014 regressed significantly. Part of his duties in Cleveland will entail working with quarterbacks, tweets Albert Breer of NFL.com. Cabot reports (via Twitter) that he’ll be the Browns’ passing game coordinator. The 41-year-old has plenty of experience in that realm, having coached QBs with the Jets (2004), 49ers (2006) and Bears (2007-09) at the pro level.

Prior to joining the Browns, Wilson worked with running backs for six different NFL organizations since 1997, having spent the last three years in Minnesota. The Vikings attempted to keep Wilson, according to ESPN’s Ben Goessling, but the expiration of his contract enabled him to land a promotion with the Browns.