1:37pm: Coughlin could have landed the Eagles’ head coaching position had he not removed his name from consideration, sources tell Gary Myers of the New York Daily News (Twitter links). With most of his assistant coaches still under contract in New York, Coughlin didn’t want to start over with a new staff and the Giants weren’t about to let all those assistants join him. 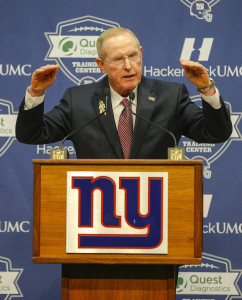 In theory, Coughlin taking himself out of the running in Philly could signal something happening with the 49ers, where he has been said to be a strong candidate. However, the Niners are said to be down to Chip Kelly or Mike Shanahan for their own vacancy, which would leave Coughlin on the outside looking in.

As PFR’s 2016 NFL Head Coaching Search Trackershows, Coughlin was one of many candidates to be connected to the job in Philadelphia. So far, the team has also interviewed interim head coach Pat Shurmur, running backs coach Duce Staley, offensive coordinator Ben McAdoo (before he was hired by the Giants), and Chiefs OC Doug Pederson. The Eagles were reportedly closing in on McAdoo before the Giants locked him down on Wednesday evening. Shurmur, Staley, and Pederson have not interviewed with any other teams to date.

Coughlin, who previously served as head coach of the Jaguars, led the Giants to a 102-90 record during his 12 seasons with the team. He also added eight victories in 11 postseason contests, with all of those wins coming in two seasons – 2007 and 2011 – during which the Giants won the Super Bowl.

In recent years, however, Coughlin’s Giants struggled, having failed to earn a postseason berth since that 2011 Super Bowl season. After going 9-7 in 2012, New York has had three straight losing years, finishing 6-10 in a weak NFC East in 2015 and sealing Coughlin’s fate — the Giants were expected to make a change if the veteran head coach hadn’t resigned.