FEBRUARY 29, 3:37pm: Colston remains on New Orleans’ roster for now, and while it still seems likely that he’ll be released, head coach Sean Payton said today that the Saints have spent a long time talking about where they’re at with the wideout (Twitter link via Katherine Terrell of NOLA.com).

FEBRUARY 23, 1:55pm: The move isn’t official yet, but the Saints will indeed release Colston, says Rand Getlin of the NFL Network (Twitter link).

1:13pm: Shortly after parting ways with veteran guard Jahri Evans, the Saints appear poised to cut another one of their longtime offensive contributors. According to Mike Triplett of ESPN.com, who cites a league source, New Orleans will likely release wide receiver Marques Colston sometime in the coming days. 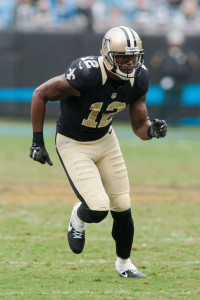 Colston, 32, has been with the Saints since 2006, when he was selected in the seventh round of the draft, 252nd overall. The Hofstra product has been one of the most productive receivers in the NFL – and the Saints’ all-time leading receivers since then, racking up six 1,000-yard seasons and 9,759 overall receiving yards over the last decade.

However, Colston had trouble staying healthy in 2015 and his production fell off as a result. For the season, the veteran wideout recorded career-worst marks in receptions (45), yards (520), and touchdowns (four), as he dealt with shoulder and chest injuries. Even prior to last season, Colston had seen his numbers slipping a little — he set new career lows in yards per game in both 2013 and 2014.

2016 is the final year of Colston’s contract with the Saints, and he had been scheduled to earn $3.2MM in salary and bonuses. By releasing him, New Orleans could trim his cap hit from $5.9MM to just $2.7MM, creating some additional flexibility for the team to handle its offseason business.

Until the move is official, there may still be a chance that the Saints reach some sort of agreement with Colston to keep him on the roster at a reduced rate, but it seems increasingly clear that he won’t return on his current contract. If the club cuts him, he’ll be immediately eligible to sign with a new team without having to pass through waivers, and as long as he’s on track to be healthy for the 2016 campaign, he should draw interest.