Browns center Alex Mack voided the final three years on his contract today, opting out of the deal for the opportunity to explore the free agent market next week. However, even though Mack could sign with another team seven days from now, he hasn’t ruled out a return to Cleveland, as agent Tim Younger tells Mary Kay Cabot of Cleveland.com. 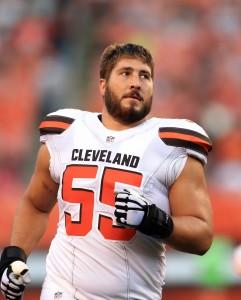 “We view Alex’s decision to void as procedural,”  Younger said. “[The opt-out] was built into his contract to afford him maximum flexibility. For the first time in his career, he will be experiencing true free agency. Although we anticipate interest from multiple teams, he was very impressed with Hue Jackson and returning to the Browns certainly remains on the table.”

According to Cabot, about six to eight teams are expected to have serious interest in Mack, who looks like the top center on the free agent market and will aim to exceed $10MM+ per year on a new deal. As I wrote earlier today, when Mack’s decision was first reported, the Jaguars figure to top that list of potential suitors — it was Jacksonville that signed the veteran center to an offer sheet two years ago, when he last hit the market. Since the Browns had used the transition tag on Mack, Cleveland was able to match the Jags’ offer sheet.

The Browns won’t hold the right of first refusal on Mack this time around, but Cabot suggests that the pending free agent may give the team the opportunity to match or exceed offers he receives from rival suitors. Mack paid a visit to Cleveland a couple weeks ago to meet with the team’s new brain trust, and came away impressed, a source tells Cabot. The Cleveland.com scribe adds (via Twitter) that she genuinely believes, after speaking to Younger today, that Mack would like to remain with the Browns if the two sides can work something out.

If Mack does end up signing elsewhere, the Browns may elevate 2015 first-rounder Cameron Erving to the starting center job rather than signing a veteran to fill the role. That way, the team could focus on fortifying the rest of its line, and potentially re-signing right tackle Mitchell Schwartz, another free-agent-to-be.