TUESDAY, 3:56pm: As expected, the Dolphins have confirmed their visit with Foster has ended without a deal in place (Twitter link). The running back will remain on Miami’s radar, but it doesn’t seem as if he’s in a hurry to sign anywhere right away.

MONDAY, 10:15am: The Dolphins continue to seek out veteran depth at the running back position, and their search has led them to a noteworthy name. According to Adam Schefter of ESPN.com (via Twitter), Arian Foster is set to pay a visit to Miami on Tuesday. 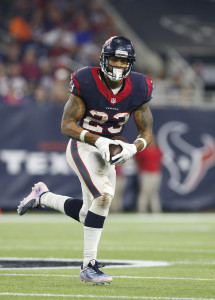 Having lost Lamar Miller to the Texans at the start of the free agent period, the Dolphins have been on the lookout for a replacement since then. The team signed C.J. Anderson to an offer sheet, but the Broncos exercised their right of first refusal to keep Anderson. The Fins were also in the running for Chris Johnson before he opted to re-sign with the Cardinals, and have reportedly explored the trade market for possible RB targets.

Foster, 29, accumulated 6,472 rushing yards during his seven years as a Texan, and that figure would have been even higher if injuries had not slowed him down over the course of the last three seasons. After earning three consecutive Pro Bowl nods from 2010 to 2012, averaging about 1,900 all purpose yards and 16 touchdowns in those seasons, Foster was limited to 25 regular-season games from 2013 to 2015. Those injuries, along with his age and his increasing cap number, resulted in the Texans releasing him earlier this month.

A physical exam figures to be a major factor in Foster’s visit with the Dolphins. According to Ian Rapoport of NFL.com (via Twitter), Foster could pass a physical now, though Tom Pelissero of USA Today tweets that the veteran back may not be able to pass a physical until early in the summer. Rapoport does concede (via Twitter) that Foster isn’t fully healthy yet, so Miami will likely just get to know him during this visit, rather than immediately signing him.

If Foster eventually gets healthy and signs with the Dolphins, he would likely split carries with second-year back Jay Ajayi.