The Cardinals have offered Evan Mathis a two-year deal, according to Ian Rapoport of NFL.com (on Twitter). Mathis visited Arizona today, right around the time that they traded offensive lineman Jonathan Cooper. 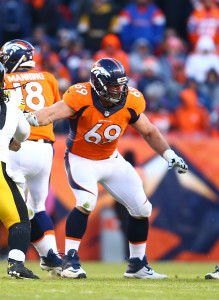 The Cardinals probably felt a little extra comfortable parting with Cooper (and a second-round draft choice) in exchange for Chandler Jones knowing that they might be able to turn around and land one of the league’s biggest names on the interior offensive line.

The Broncos signed the two-time Pro Bowler last summer after the Eagles released him, and he ultimately started in 12 of 16 regular-season appearances. Mathis, 34, earned rave reviews for his performance from Pro Football Focus (subscription required), which ranked him third out of 81 qualifying guards.

Mathis indicated last month that he would be open to playing for the Broncos in 2016 if he were to continue his career. Since then, we have yet to hear much about Denver’s interest in a reunion or anything definitive on Mathis’ NFL plans.

In 2014, despite playing just 608 offensive snaps, the former third-round pick ranked as the league’s best left guard, performing particularly well as a run blocker, according to Pro Football Focus’ data (subscription required). PFF had previously graded Mathis as the NFL’s No. 1 guard in 2011, 2012, and 2013.