With the legal tampering period underway and free agency drawing ever closer, Broncos defensive lineman Malik Jackson is on the verge of a significant payday. It’s just a matter of which team will pony up for the 26-year-old. While the reigning Super Bowl champions are trying to retain Jackson, having offered him anywhere from $11MM to $12MM per annum as of last week, they’re certainly not the only club intrigued by the four-year veteran. In fact, the Jaguars, Bears and Raiders have “expressed serious interest” in Jackson, reports Mike Klis of 9News.

Based solely on cap space, the defense-needy Jaguars have the best chance to sign Jackson. The Jags have an NFL-high 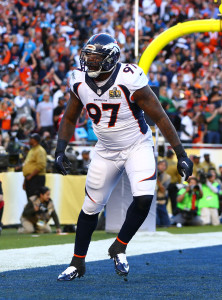 $82.24MM of spending room. Oakland, Denver’s AFC West rival, is in third at over $60MM. The Bears rank seventh at just under $47MM, while the Broncos lag well behind in the $9MM range.

The Raiders and Bears have obvious connections to Jackson through their head coaches. Oakland’s Jack Del Rio was the Broncos’ defensive coordinator during the first three years of Jackson’s career (2012-14), and the Bears’ John Fox was Denver’s head coach during that time span. Jackson logged little playing time as a fifth-round rookie while Fox and Del Rio were at the helm, but he partook in back-to-back 16 game seasons in his next two campaigns and amassed nine sacks. The 293-pounder has shown great versatility since entering the league, having thrived in two 4-3 positions (defensive tackle and end) and as a 3-4 five-technique end.