On Thursday, the Broncos reached out to Ryan Fitzpatrick‘s representation to express their interest in the veteran quarterback. However, other quarterback-needy teams are not as high on the veteran signal caller. The Browns are not interested in Fitzpatrick and the Rams don’t want to spend significant money to sign him, according to sources who spoke with Manish Mehta of the New York Daily News. 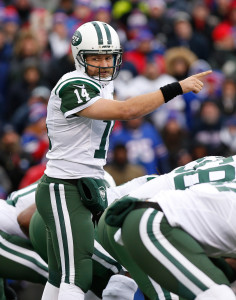 Mehta suggests that the Browns are disinterested in Fitzpatrick because they already have a veteran signal caller in Josh McCown. The Browns are expected by many to draft a quarterback at No. 2 overall while potentially using McCown as a transitional option. It sounds as though the Rams may have some interest in Fitzpatrick, but if they do, it’s likely only as a failsafe. If the Rams aren’t willing to spend significant money on the Harvard product, then they’re unlikely to vault beat out the Jets for his services.

Fitzpatrick is said to be seeking an average annual payout close to what Brock Osweiler and Sam Bradford have netted this offseason. The Jets, at this point, are unwilling to pay something in the neighborhood of $16MM/year, having offered something only a little better than what Chase Daniel got from the Eagles. Daniel and the Eagles agreed to a three-year deal with a base value of $21MM on Wednesday.

The Browns have been tied to Colin Kaepernick this week and they are said to be more interested in him than the Jets are. Meanwhile, the polarizing sixth-year passer is reportedly the Broncos’ top quarterback target. Robert Griffin III would reportedly like to be under center for the Rams, but it’s not clear if Los Angeles is reciprocating that interest.

At age 33, Fitzpatrick is coming off of a career year. In 2015, Fitzpatrick started all 16 games for the Jets, setting new career highs by tossing 31 touchdowns and racking up 3,905 yards through the air. He led the team to a 10-6 record for the season, narrowly missing a playoff berth.