Ravens To Cut Will Hill

4:02pm: As I speculated below, the Ravens may in fact have known something that we didn’t regarding Hill’s off-field behavior. According to Jeff Zrebiec of the Baltimore Sun (Twitter link), the safety is facing potential discipline from the NFL. Since Hill has already been suspended three times by the league, he could be facing a lengthy ban if he’s suspended again.

2:10pm: Following the Ravens’ signing of free agent safety Eric Weddle, the other shoe has dropped. According to Jeff Zrebiec of the Baltimore Sun (via Twitter), the team is releasing safety Will Hill. The move has since been confirmed by the team. 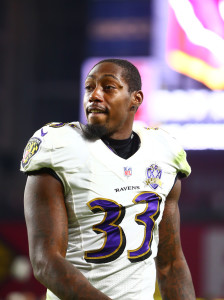 After acquiring Weddle, the Ravens had a glut at the safety position to address, with Hill, Lardarius Webb, Kendrick Lewis, and Matt Elam among the players on the club’s depth chart. Although Hill didn’t have as large a cap hit as Webb, and likely had a better chance of making an on-field impact in 2016 than Lewis or Elam, he’s the one who finds himself out of a job.

Having made 14 starts in 2015 and received a contract extension from the team, Hill was Baltimore’s best safety according to Pro Football Focus, which ranked him 17th out of 88 qualified safeties at the position. For the season, he had 64 tackles, a sack, an interception, and six passes defended, but he saw his role reduced near the end of the season, appearing in just 49 defensive snaps in the Ravens’ final two games.

Hill has violated NFL policies in the past, resulting in multiple suspensions, and it’s possible the Ravens know something that we don’t regarding his off-field behavior. For now though, it looks like an on-field decision, with the team prepared to pair Weddle with Webb in its starting lineup. By cutting Hill, the Ravens will create $2.84MM in cap savings for the 2016 season.

4 comments on “Ravens To Cut Will Hill”