THURSDAY, 2:20pm: The Saints announced (on Twitter) that Fleener’s deal is official.

WEDNESDAY, 5:57pm: Drew Brees lost his starting tight end during each of the past two offseasons, but now the Saints spent to fill the void. Coby Fleener has agreed to join the Saints, according to Mike Garafolo of Fox Sports (on Twitter). 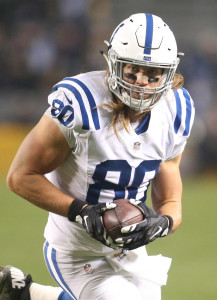 It’s a five-year deal for Fleener, per Saints official spokesman Greg Bensel (on Twitter), one worth $36MM, Ian Rapoport of NFL.com reports (via Twitter).

After trading Jimmy Graham last season, the Saints received solid production from Ben Watson in 2015. But Watson departed to join the Ravens, leaving Brees with another hole at tight end.

Fleener operated in a perpetual timeshare with Allen during his four seasons with the Colts but now looks to be the clear-cut No. 1 tight end on his new team.

The 6-foot-6 tight end provided a consistent-if-unspectacular presence for Andrew Luck in 2013-14, when the ex-Stanford teammates were again in sync. Fleener, 27, caught 103 passes for 1,382 yards and 12 touchdowns during those seasons. Fleener’s top season came in 2014, when he averaged 15.2 yards per catch and served as Luck’s No. 2 option.

Tight ends in Sean Payton‘s system have thrived for years, and Fleener should be a key fixture in Brees’ progression hierarchy as he winds down his career.