THURSDAY, 12:46pm: The Vikings announced that their deal with Lamur is now official.

WEDNESDAY, 4:43pm: Lamur’s deal will be worth $6MM over two years, with $2.5MM guaranteed, according to Jim Osczarski of the Cincinnati Enquirer (on Twitter). The Bengals were not interested in retaining Lamur, per Osczarski; they did not make an offer.

3:56pm: It’s a two-year deal for Lamur and the Vikings, tweets Tomasson. 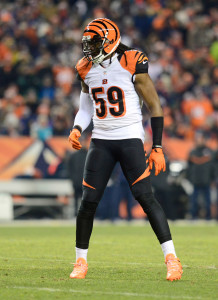 The former Bengals outside linebacker will re-join Mike Zimmer, who coached the fifth-year veteran from 2012-13. Terms of the deal have not been disclosed.

Lamur, who didn’t start for the Bengals last season after breaking with the first unit in 13 games in 2014, did not fare well — according to Pro Football Focus — last season. The website graded the Bengals backer as its No. 82 overall linebacker. Lamur, an undrafted free agent in 2012, did not fare well during his full-time season as a starter, either, grading as PFF’s No. 39 linebacker out of 40 qualified 4-3 second-level performers.
The 6-foot-4 Lamur did record two interceptions during his third year and signed a second-round tenure to stay in Cincinnati last season. 2015 free agent acquisition A.J. Hawk replaced him in the Bengals’ starting lineup.

Entering his age-27 season, Lamur will likely be given an opportunity to start alongside Anthony Barr and Eric Kendricks.

This doesn’t necessarily rule out a Chad Greenway return to the Twin Cities for a prospective 11th season, especially since Greenway’s likely a candidate for a one-year deal, but it clouds the prospect.