Still without a new contract for the 2016 season, free agent cornerback Jerraud Powers is checking in with a familiar team today, according to Ian Rapoport of NFL.com, who reports (via Twitter) that Powers is visiting Arizona. He has played for the Cardinals for the last three seasons. 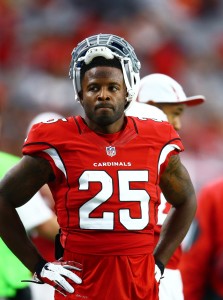 Powers, 28, spent the first four years of his NFL career in Indianapolis before making the move to Arizona. Having started 82 of his 87 career regular-season games, the former third-round pick is one of the more accomplished cornerbacks still available on the free agent market.

In 2015, Powers started 13 games for the Cardinals, picking up an interception to go along with 50 tackles, nine passes defended, and a pair of fumble recoveries. However, Pro Football Focus wasn’t overly high on his play, ranking him 79th out of 111 qualified cornerbacks, assigning him mediocre grades for both his pass coverage and run defense.

It’s not clear why Powers would need to make a visit to meet with the Cardinals, considering the team’s brain-trust hasn’t undergone any real changes this offseason. It’s possible that the club wants to get an idea of what sort of shape he’s in, perhaps conducting a physical, before making any decision on whether or not to bring him back.

During the legal tampering period earlier last month, Powers told Josh Weinfuss of ESPN.com that he’d like to sign a three- or four-year deal, and hoped to join a title contender. While he visited the Giants during the free agent period, Powers didn’t see his market develop as he hoped, and is very unlikely to land a long-term contract at this point.