Restricted free agent Jeff Heath will be sticking with the Cowboys, as expected, but rather than simply signing his RFA tender, the veteran safety has agreed to a long-term deal with the club. According to Todd Archer of ESPN.com, the Cowboys have signed Heath to a four-year contract, locking him up through the 2019 season. 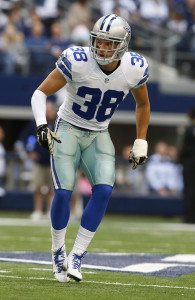 An undrafted free agent out of Saginaw Valley State, Heath started nine games during his first season with the Cowboys in 2013, compiling 60 tackles, an interception, and a fumble recovery for a touchdown. He has seen less time on defense in recent years, serving primarily as a special teams contributor, but he did grab a pair of INTs in his 206 defensive snaps in 2015.

Having spent three years in Dallas, Heath was eligible for restricted free agency this offseason, and the Cowboys tendered him a one-year offer worth $1.671MM. Had he signed that tender, he would have been on track to reach the open market in 2017, but his salary for 2016 would have been non-guaranteed.

Financial terms of Heath’s new four-year contract aren’t yet known, but there’s a good chance he exceeded that $1.671MM in guarantees alone, and his average annual salary may very well top that figure too.