7:53pm: No negotiations have transpired between the Jets and Ferguson, ESPN.com’s Rich Cimini reports (on Twitter). The request came in a more informal manner, per Cimini, with a team official mentioning a possible contract adjustment to Ferguson in passing.

7:01pm: The Jets still have their eye on re-signing Ryan Fitzpatrick and are now taking precise action in their attempt to keep arguably the top quarterback available. 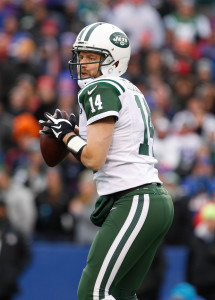 Ferguson will be receptive to cutting his pay to stay in New York, sources told Mehta. The Jets also approached their 6-foot-5 tackle about this restructure in the middle of a workout. There are two seasons remaining on Ferguson’s eight-year, $73.6MM contract.

Gang Green’s desire to reduce its left tackle’s wages makes sense, with the team possessing the fewest salary cap space in the league at $713K, according to NFLPA records.

Although Ferguson hasn’t missed a game in his 10 seasons as Gang Green’s blind-side bastion, he’s 32 and has the highest 2016 left tackle cap number as of now at $14.07MM. Mehta reports the Jets approached the 11th-year tackle about the pay cut last week, and while Fitzpatrick resides as possibly the key reason for this request, it’s not the only one.

How much exactly Ferguson will be asked to trim from his 2016 salary is unclear, but Mehta estimates it will be at least $4-$5MM.

Fitzpatrick’s asking price has remained at $16MM annually, which has become the floor for entrenched starting quarterbacks. This new figure the 33-year-old Fitzpatrick has in mind would represent a staggering raise after he made just $3.25MM in his previous season with the Jets. We haven’t heard anything suggesting New York is willing to give Fitzpatrick this kind of money annually, with the Jets’ previous-best offer coming in at $7-$9MM AAV.

The No. 4 overall pick in 2006, Ferguson has started 167 regular-season and playoff games for the Jets and earned Pro Bowl nods from 2009-11. Both Todd Bowles and Mike Maccagnan gave procedural answers regarding Ferguson’s status on the 2016 Jets in recent weeks, providing some inevitability to these pay-reduction discussions. Pro Football Focus bestowed its No. 60 overall tackle ranking on Ferguson last season.

New York visited with Kelvin Beachum as a potential replacement for Ferguson, but after the Jaguars signed him, the Jets don’t have a viable alternative. Ryan Clady has ventured onto the trade block but has a cap number of $10.1MM and hasn’t proven to be nearly as durable as Ferguson, missing 30 regular-season games the past three years.