3:41pm: The Seahawks have officially announced the signing.

1:15pm: The Seahawks will reunite with a familiar face, as they’re set to sign free agent cornerback Brandon Browner on Monday, Jason La Canfora of CBSSports.com reports (Twitter link). Browner will sign a one-year deal, according to Adam Schefter of ESPN.com (Twitter link). 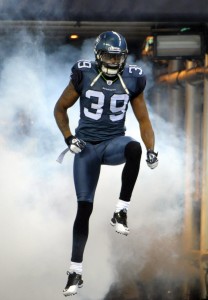 Browner, of course, played for Seattle from 2011-13, starting 36 games and winning a Super Bowl title during that time. After one season in New England (with whom he also won a Super Bowl), Browner signed a signed a three-year, $15MM contract with the Saints and became one of the team’s starting corners. However, he disappointed in his only season in New Orleans, racking up penalties and struggling in coverage. Pro Football Focus rated him dead last in the league among 113 qualified cornerbacks.

Now 31 years old, Browner will return to the club where he’s had his best success as a pro, reuniting with his Legion of Boom compatriots Richard Sherman, Earl Thomas, and Kam Chancellor. The Seahawks did re-sign fellow corner Jeremy Lane during the offseason, so Browner might not be immediately placed back in the starting lineup. But Lane does excel in the slot, so there should be an opportunity for Browner to see the field in Seattle’s nickel package.

Browner didn’t take any other known visits after being released by the Saints, but since he was a street free agent, clubs wouldn’t have had to announce if they met with him. Teams could have been scared off by his dismal year in New Orleans, but Browner recently said that he played through a torn MCL last season, which could help explain some of his woes.