The Dolphins have been connected to Arian Foster for much of the offseason, but it doesn’t sound like he is a priority free agent for them. The Dolphins “will consider him if they have an injury or if their young backs falter,” but they will not pursue him otherwise, according to Barry Jackson of The Miami Herald. 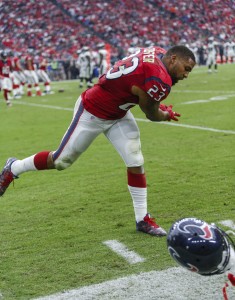 So far, the Dolphins have been effusive in their praise for third-round running back Kenyan Drake and he figures to be the No. 2 back behind Jay Ajayi. The team’s running back depth chart also features Damien Williams (sidelined with an undisclosed injury), Daniel Thomas, and Isaiah Pead. Still, the Dolphins have kept their eyes peeled for other veteran backs like Foster and Dan Herron. Jackson says that Herron is in a similar boat as Foster – although he did not receive an offer after his Monday workout, he remains on their radar should Miami determine it needs help at the position.

Ranked as our No. 3 available offensive free agent at this stage of the offseason, Foster racked up 6,472 rushing yards during his seven years as a Texan, and earned three consecutive Pro Bowl nods from 2010 to 2012, averaging about 1,900 all purpose yards and 16 touchdowns in those seasons. However, injuries have slowed Foster down in recent years. In 2015, Foster played in just four games and ran for 163 yards off of 63 carries.

Recently, PFR’s Dallas Robinson listed the Dolphins as one of eight teams that could potentially be a fit for Foster.