11:30am: Speaking to reporters today, Jones said that the holdout is “behind him” and it’s now “all about football” (Twitter link via Armando Salugero of The Miami Herald). Furthermore, the safety said he will not hold out from training camp.

Recently, it was reported that Jones was mulling the idea of an in-season holdout if he did not get a pay raise, but it seems unlikely that Jones will go that route if he is committing to show for training camp.

9:19am: Reshad Jones‘ practice boycott is over, at least for now. After skipping out on the first day of June’s mandatory minicamp, the safety is in the building today, according to Albert Breer of The MMQB (via Twitter). 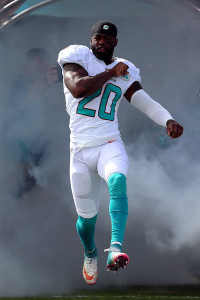 Today marks Jones’ first appearance at the Dolphins’ practice facility as he also stayed away from voluntary OTAs in May. Despite having two years remaining on his current contract, the 28-year-old is pushing to renegotiate the terms. After earning his first Pro Bowl selection in 2015, Jones apparently feels like now is the time to strike.

He is ostensibly looking to be paid like one of the top safeties in the NFL, but that will be quite the uphill battle for him since strong safeties are not paid as highly as free safeties. As far as strong safeties go, Jones is actually the highest paid one in the NFL, so long as you count him as a free safety these days. As it stands today, Jones is slated to earn base salaries of $7.225MM in 2016 and $7.06MM in 2017, with cap hits of $8.203MM and $8.038MM, respectively.

While Jones continues to pout, the Dolphins have been publicly upbeat about the group of safeties that have been participating this offseason. Of course, they’d much rather have Jones in the fold and they’d like to avoid the in-season holdout that he is reportedly mulling. However, caving into those threats and reworking Jones’ deal with two years to go would set a bad precedent for the team going forward. I wouldn’t be surprised to see the Dolphins hold their ground and force Jones to play out the ’16 season on his current deal before discussing a new one.