WEDNESDAY: The Saints will indeed release Brown with an injury settlement, per Josh Katzenstein of NOLA.com.

TUESDAY: The season is over before it began for Vincent Brown, as the Saints have placed the veteran wide receiver on injured reserve, according to Joel Erickson of the Advocate (Twitter link). Brown signed a one-year, minimum salary benefit contract with New Orleans a little over two months ago. 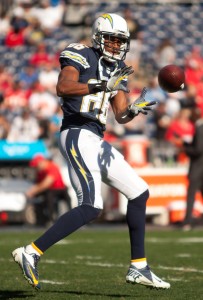 As Roster Resource indicates, the loss of Brown doesn’t do much to deplete a relatively deep Saints receiver corps, which is fronted by starters Brandin Cooks and Willie Snead. Former Ohio State pass-catcher Michael Thomas, chosen in the second round of the 2016 draft, is expected to man the slot during his rookie year, while New Orleans is still holding out hope that Brandon Coleman can contribute in some fashion. The club also boasts Reggie Bell and Kyle Prater further down the depth chart.

As well-stocked as the Saints are at receiver, they don’t necessarily need to add a free agent to make up for the loss of Brown, but there are certainly options available on the open market even after veteran Anquan Boldin — probably the best receiver who was still unsigned — agreed to a deal with the Lions earlier today. Three names that stand out are Hakeem Nicks, Denarius Moore, and Nathan Palmer, each of whom attended a May workout in New Orleans with Brown.

Brown, for his part, has been limited by injuries for much of his career, and he hasn’t posted a full season since 2013, when he caught 41 balls for the Chargers. If his current ailment isn’t serious, he could negotiate an injury settlement with the Saints, allowing him to be removed from the IR and reach free agency.