1:36pm: It’s a two-year deal for Johnson, a source tells Adam Schefter of ESPN.com (on Twitter). The Colts owed the veteran $2.5MM for this season, but that number will be reduced thanks to the offset language in his previous deal.

11:46am: Andre Johnson is continuing his tour of the AFC South. The veteran wide receiver has agreed to sign with the Titans, according to Ian Rapoport of NFL.com (on Twitter). 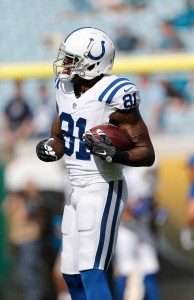 After spending 12 seasons in Houston, Johnson signed a three-year, $21MM contract with the Colts a year ago, and looked poised to enjoy the benefits of catching balls from Andrew Luck after playing with a cavalcade of mediocre quarterbacks over the years with the Texans. However, Luck missed more than half the season, and Johnson struggled, averaging a career-low 31.4 receiving yards per game. For the season, he had 41 catches for 503 yards and four touchdowns, easily the worst full-season marks of his career. For a player who averaged more than 1,100 receiving yards per season during the first 12 years of his career, earning seven Pro Bowl nods during that time, last year’s drop-off was precipitous.