Just days after signing with the Falcons, wide receiver Lance Moore has announced his retirement from the NFL, according to a press release from the team. 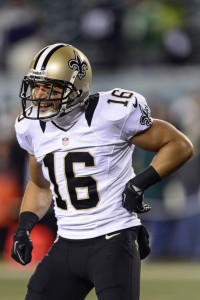 Moore, who turns 33 later this month, auditioned for the Chargers recently before the team ultimately chose to sign James Jones instead. On Friday, the veteran reached agreement on a deal with the Falcons. Apparently, Moore had a change of heart over the weekend and opted to hang ’em up instead.

Moore was a favored target of Drew Brees‘ for years before he was released by the team in March 2014. In 2013, Moore’s receptions (37), receiving yards (457), and receiving touchdowns (two) were his worst totals since an injury-plagued 2009. Unfortunately, things didn’t pick up when he joined the Steelers. In 2014, he caught just 14 balls with Pittsburgh, matching his lowest total since his rookie year. Following that disappointing season, he asked for his release and then hooked on with the Lions. His performance was roughly the same there as he caught 29 passes for 337 yards and four touchdowns.

We here at PFR wish Moore all the best in retirement.