Marcell Dareus will begin a second straight season on a suspension, but this one will shelve the talented defensive tackle for four games. The 26-year-old defender will check into a rehab facility, he announced on Saturday after leaving the sideline prior to the Bills’ second presea 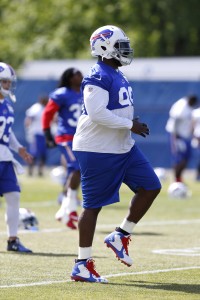 “After careful consideration of recent events within my life, I have made the decision to enter a rehabilitation facility,” Dareus said in a statement released by the Bills, via Vic Carucci of the Buffalo News. “I feel this is the best decision for me, my family and my teammates as I move forward in my career. I appreciate the support of my teammates and the Bills organization through this process.”

Expected to play against the Giants today, Dareus did not dress and left the field prior to kickoff, Carucci reports.

The Bills, who expressed disappointment in what they deemed selfish actions when the suspension came down earlier this week, released a statement Saturday supporting the embattled lineman.

“We are fully supportive of Marcell and this decision to take the time he needs to seek treatment,” the statement read.

Buffalo signed Dareus to a six-year, $95MM extension last September but will now see him serve another suspension at a time the Bills are reeling on defense, having lost Reggie Ragland for the season and Shaq Lawson for an undetermined portion of it.

Dareus claimed earlier this week a missed drug test hovered at the root of his four-game ban, but Ian Rapoport of NFL.com reported that marijuana usage caused it. The former Alabama defensive tackle served a one-game substance-abuse suspension last season.

This comes barely an hour after the team decided to cut Karlos Williams, who’s also facing a four-game substance-abuse ban.

One comment on “Marcell Dareus To Check Into Rehab Facility”