5:55pm: Branch violated team rules in some fashion, but the club doesn’t regard it as a “big deal,” a source informed Howe. Therefore, the writer doesn’t expect it to impact Branch’s standing on the roster.

5:06pm: Branch’s suspension will only be for “a few days,” a source told Jeff Howe of the Boston Herald (Twitter link). It doesn’t appear to be a particularly serious issue, then. However, it’s nonetheless another off-field check against Branch.

4:27pm: Patriots defensive lineman Alan Branch has informed his teammates that he has received a suspension, reports Doug Kyed of NESN (Twitter link). Both the cause and length of the suspension are unknown at this time, but Mike Reiss of ESPNBoston.com tweets that the Patriots, not the NFL, are disciplining Branch. Notably, Branch’s previous employer – Buffalo – cut him in August 2014 after DUI arrest. 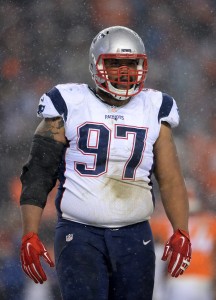 On the heels of his release from the Bills, Branch joined the AFC East rival Pats, though his tenure in New England hadn’t gone that smoothly even before the news of a suspension. Branch skipped the Patriots’ offseason workout program and arrived to training camp overweight and out of shape a year ago. That came after the Patriots awarded a two-year, $6MM deal to Branch, who served as a depth piece for the then-reigning Super Bowl champions.

In Branch’s second year with the Patriots, he took on a bigger role in starting 15 of their 16 regular-season games and appearing in 39.4 percent of the club’s defensive snaps. The 31-year-old logged 31 tackles, two forced fumbles and a sack in the process, also ranking an impressive 36th in overall performance among Pro Football Focus’ 123 qualified interior D-linemen (subscription required). New England then picked up Branch’s $400K bonus for 2016 with the intention of keeping him.

In the event the team decides to move on from Branch, cutting him would save $2.4MM against its cap. Along with Branch, Malcom Brown and Terrance Knighton currently headline the Pats’ group of interior D-linemen (depth chart).

A 2007 second-round pick out of Michigan, Branch previously spent time with the Cardinals and Seahawks before heading to the AFC East in 2013. The 350-pounder has registered 118 appearances (64 starts), 218 tackles, nine sacks and four forced fumbles during his nine-year career.