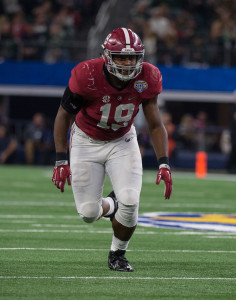 completely torn. Schefter adds that the team will get a second opinion on Monday, and the team will then determine how much time Ragland will miss.

The former Alabama standout was selected by the Bills in the second round of this year’s draft. The organization actually traded up for the talented linebacker, dealing a second-rounder (49th overall), fourth-rounder (117th overall), and a future fourth-rounder for the 41st-overall pick. Between the 2014 and 2015 season, Ragland compiled 195 tackles, 17 tackles for loss, and four sacks. As a result of this production, Roster Resource listed the rookie as one of the Bills’ starting linebackers.

The Bills have seemingly been preparing for Ragland to miss some time. Earlier today, the team announced the signing of linebackers David Hawthorne and Brandon Spikes.