12:00pm: If the Vikings make it to the NFC Championship game, the 2018 conditional fourth-rounder headed to the Eagles will turn into a third-rounder, tweets ESPN.com’s Adam Schefter. If the Vikings win the Super Bowl, the pick will become a second-rounder.

10:23am: The 2018 fourth-round pick that the Eagles are receiving can become a third-round pick or even a second-round choice, depending on how Bradford performs with the Vikings, Albert Breer of NFL.com (on Twitter).

Bradford’s deal includes a $1MM escalator if he plays 90% of his team’s offensive snaps in 2017, Ben Goessling of ESPN.com notes (on Twitter).

9:33am: The Vikings have acquired Sam Bradford from the Eagles, according to Adam Schefter of ESPN.com (on Twitter). The Eagles will receive Minnesota’s 2017 first-round pick and 2018 fourth-round pick, per a club announcement confirming the deal. 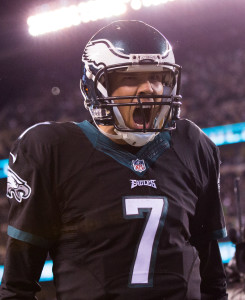 The Vikings now have a capable and experienced quarterback to step in after Teddy Bridgewater suffered a devastating knee injury earlier this week. Many have criticized the Vikings for not having a quality backup behind Bridgewater, but they have found a respected signal caller to lead the way. However, it remains to be seen if Bradford can pick up the offense with less than a week to go before the season opener. Ultimately, the Vikings felt better about Bradford learning the playbook on short notice than having Shaun Hill under center, despite his familiarity with Norv Turner‘s system.

The Vikings have given up a significant haul to acquire Bradford, who ostensibly would only be their starter for one year while Bridgewater is sidelined. However, the former No.1 overall pick is signed through the 2017 season and that does give the Vikings some insurance in case Bridgewater is not ready to go for the start of next season. Also, if Bradford performs well this year and Bridgewater comes back healthy, the Vikings could find a healthy trade market for Bradford and recoup some of what they sent to Philly.

With Bradford out of the picture, the Eagles will turn to either Chase Daniel or rookie Carson Wentz to start at QB to begin the season. Daniel, who has a history in Doug Pederson‘s offense, is more likely to get the nod.

The trade reunites Bradford with his old teammate at Oklahoma, Adrian Peterson. Bradford set new career-highs in 2015 with a 65.0% completion percentage and 3,725 yards passing. He also tossed 19 touchdowns against 14 interceptions, leading the club to a 7-7 record in his starts.