Cornerback Keenan Lewis was making the free agent rounds last month, but it sounds like he’ll need some more time before he gets back on the field and potentially signs with a club. Today, Lewis posted pictures on Instagram that appear to show him in a hospital bed post-surgery. It’s not clear why Lewis is in the hospital, though his lingering hip and groin injuries were apparently keeping him from signing with a club this offseason. 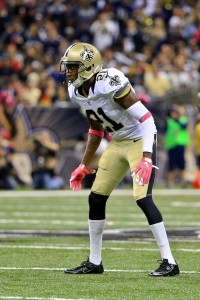 Lewis came off of the PUP list earlier this offseason but the Saints released him in mid-August. Coach Sean Payton and others have said that he was cut because he was unable to get healthy, though Lewis has posited that his relationship with defensive coordinator Dennis Allen played a larger role in the decision.

Soon after he was cut, Lewis visited the Steelers and drew interest from a handful of other teams, including the Lions, Jets, and Cardinals. Pittsburgh brought Lewis through the locker room where he played from 2009-2012, but they ultimately passed due to his hip. The Steelers are said to still have Lewis on the radar, but they first have to see him healthy. If Lewis went under the knife today, that may take a little longer than initially expected.