Cameron Wake has spent his entire NFL career, which started in 2009, with the Dolphins. Unfortunately, the Dolphins haven’t been to the playoffs since the 2008 season. As the 1-4 Dolphins get set to take on the Steelers on Sunday, it doesn’t look like they’ll be snapping their playoff drought this year either. Still, Wake says that he won’t ask for a trade, as Adam Beasley of the Miami Herald writes. 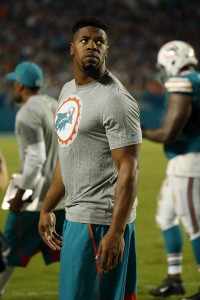 “It’s not a ‘which one’s more important,’” Wake said when asked about whether he wanted to win or spend the rest of his career with the Fins. “I just want to win. Obviously, I’m here in Miami and I’ll be here as long as they have me, and I’ll do everything I can to make sure Miami’s a winner. I’m not concerned with going anywhere else, doing anything else.”

Wake inked a two-year extension with Miami in May but the team can get out from under much of that obligation by trading him before the Nov. 1 trade deadline. The 34-year-old doesn’t have a say whether that happens, of course, but he’s not pushing for it to happen.

The seven-year veteran made only seven appearances last season due to a torn ACL. So far this year, he has four tackles and one sack.