The Giants worked out a pair of linebackers today, according to ESPN.com’s Jordan Raanan (via Twitter): Shaq Riddick and Carlos Thompson. The auditions are a bit surprising, as 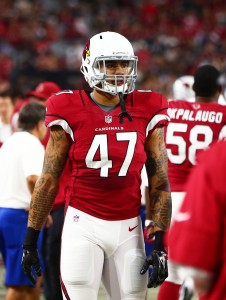 the Giants don’t appear to have any injury concerns among their linebackers. Furthermore, the team promoted rookie linebacker Deontae Skinner to the active roster yesterday.

Riddick, a former fifth-round pick, has yet to see the field after one-plus season in the NFL. The 23-year-old spent the entire 2015 campaign with the Cardinals organization, but he was released prior to this season. He briefly caught on with the Cardinals practice squad, but he was subsequently cut. Riddick had six sacks during his senior season at West Virginia.

Thompson, 24, went undrafted out of Ole Miss in 2015. The former defensive end spent all of 2015 with the Texans, but he was waived in late August. Thompson had 29 tackles during his senior season at Mississippi.

One comment on “Giants Work Out Shaquille Riddick, Carlos Thompson”