Josh Brown has been parked indefinitely after being placed on the commissioner’s exempt list and it’s hard to see him playing for the Giants (or any other NFL team) again. The kicker has opted against appealing his status with the league and has remained silent, until releasing a statement to ESPN.com’s Adam Schefter today: 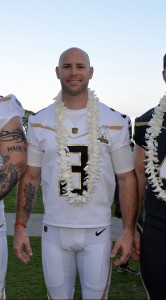 “I am sorry that my past has called into question the character or integrity of The New York Giants, Mr. Mara or any of those who have supported me along the way,” Brown wrote (via Schefter on Facebook). “I have taken measures to get help so that I may be the voice of change, not a statistic. It is important to share that I never struck my wife, and never would. Abuse takes many forms, and is not a gray area. Through the past several years I have worked to identify and rectify my own behaviors. The road to rehabilitation is a journey and a constant modification of a way of life. My journey will continue forever as a person determined to leave a positive legacy and I embrace the opportunities to show and speak about what has helped me to be that man. In the interim, I am cooperating with the Giants and the NFL. Thank you to everyone that has supported me, I will not let you down.”

Brown’s assertion that he never struck his wife will be a key point of contention when he eventually meets with team and league officials. As a part of his counseling program, Brown wrote: “I have physically, verbally, and emotionally abused my wife.” Brown is expected to meet with the Giants today, according to ESPN.com’s Dianna Russini (on Twitter).