Last week, Giants kicker Josh Brown was placed on the commissioner’s exempt list, which effectively sidelines him with pay while the investigation into his conduct continues. Brown could theoretically appeal that decision, but Adam Schefter of ESPN.com (on Twitter) hears that he is unlikely to do so. 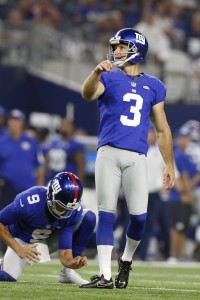 While on the list, Brown will still collect his ~$1.15MM base salary. At some point, Brown will probably be cleared to play football again, but it’s hard to imagine him landing another NFL job given the public relations firestorm surrounding him. The Giants, meanwhile, have moved on after signing veteran kicker Robbie Gould.

The NFL has been criticized for only giving Brown a one-game suspension at the start of the season but a recent report indicated that the union was pressured the league office into rendering a decision in September rather than allowing the matter to drag on. Had the league waited, they could have given Brown a more appropriate punishment and avoided a PR nightmare.