Eric Reid Out For Season With Biceps Tear

TUESDAY, 6:40pm: The 49ers have placed Reid on the injured reserve, according to Maiocco (via Twitter).

MONDAY, 4:49pm: The 49ers confirmed Reid is out for the year after an MRI revealed the fourth-year safety sustained a torn biceps, via Eric Branch of the San Francisco Chronicle (on Twitter). He will require surgery, Matt Maiocco of CSNBayArea.com tweets.

MONDAY, 4:29pm: Reid announced (on Twitter) he won’t be taking the field with the 49ers the rest of the season. While the team hasn’t placed him on IR yet, that move is probably coming soon.

SUNDAY, 8:15pm: Barreling toward one of the worst seasons in franchise history, the 49ers may well be without Eric Reid the rest of the way. Initial tests conducted on the fourth-year safety revealed a torn biceps, Ian Rapoport of NFL.com tweets. 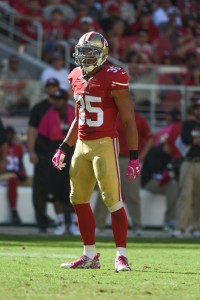 The former first-round pick left Sunday’s Patriots-49ers game during the second half, and looks set to miss what would be the first extensive action of his career. Despite the 49ers being closer to preparing for the 2017 draft than competing for a playoff spot, this uncertainty comes at a tough time for Reid, who is set to play on the fifth-year option in ’17.

San Francisco GM Trent Baalke said he’d be interested in signing Reid to an extension in April, but nothing transpired on that front and the fifth-year option became Reid’s immediate future. How long Baalke remains part of that is up for debate, with the franchise having lost eight straight games.

The former No. 18 overall pick and fourth-year starter is set to make $5.676MM in 2017 as a result of the Niners picking up his option season, and having a significant injury now could delay any such talks for a long-term deal. Reid’s option season is guaranteed for injury only, so the safety not being able to pass a physical by the time the new league year begins would ensure the attached salary goes to him.

Reid’s made 62 tackles this season, including a team-high seven against the Patriots, and intercepted the eighth pass of his career during this campaign as well. The soon-to-be 25-year-old back-line player also has forced a fumble to go along with six pass deflections. Reid’s played and started in at least 15 games in each of the past three seasons, with his fourth looking likely to end that run.

Reid would likely join starters NaVorro Bowman and Arik Armstead on IR, should the diagnosis confirm the team’s fears.

2 comments on “Eric Reid Out For Season With Biceps Tear”