The Bears have made a handful of roster moves today, and the transactions are headlined by the activation of wide receiver Marquess Wilson from the physically unable to perform list, as Brad Biggs of the Chicago Tribune reports (all Twitter links). Additionally, Chicago has placed defensive lineman Will Sutton on injured reserve and signed fellow defensive lineman C.J. Wilson to take his place on the 53-man roster. 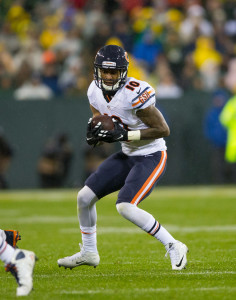 Marquess Wilson, 24, should add a reinforcement at wide receiver now that Alshon Jeffery is set to miss the next month after a PED suspension. Out since the summer with a broken foot, Wilson should immediately slot back into the Bears’ regular receiver rotation. 2015 marked the third NFL season for Wilson, and he turned in a career-high 464 yards off of 28 catches with a touchdown in 11 games. He’ll become a free agent after the season.

Sutton becomes the latest Bear to fall victim to injury, and is now the 12th player Chicago has placed on IR, tweets Biggs. A third-round pick under the club’s previous regime, Sutton was involved in trade rumors this offseason, but ultimately remained in the Windy City. Thus far in 2015, Sutton had appeared in eight games, starting six.

C.J. Wilson, 29, has 78 career games under his belt, with most of that time coming as a rotational option with Packers from 2010-2013. He played in 12 contests in 2015 (eight with the Lions, four with the Raiders), and picked up nine total tackles to go along with one sack. Wilson has bounced on and off Chicago’s roster this season, but hasn’t actually appeared in a game with the Bears.