It’s starting to get bad in Chicago. The Bears lost linebacker Danny Trevathan to injury during today’s loss to the Titans, as the defender was carted off the field during the fourth quarter. NFL.com’s Ian Rapoport tweets that Bears coach John Fox fears the defender suffered “a serious knee injury.” Rapoport adds that the team believes Trevathan tore his ACL, and he notes that the linebacker will soon have an MRI. 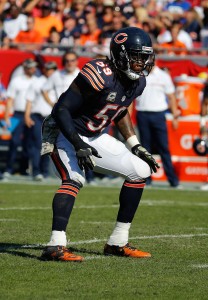 The 26-year-old has been productive during his first season in Chicago. Trevathan ranks second on the team in tackles (61), and he’s also added a sack and four passes defended. The Bears signed the veteran to a four-year, $24.5MM contract this offseason. Trevathan had spent the previous four years in Denver.

Injuries are certainly nothing new to the Bears. The team has already lost quarterbacks Brian Hoyer and Connor Shaw for the season, although there’s some optimism that starter Jay Cutler could return. The Bears will also be without wideout Kevin White, tight end Zach Miller, offensive lineman Hroniss Grasu and Kyle Long, and defenders Lamarr Houston, Will Sutton, and Brandon Boykin. Wideout Alshon Jeffery and linebacker Jerrell Freeman are currently serving suspensions.

If Trevathan does miss time, the Bears will likely turn to linebackers Christian Jones or John Timu.