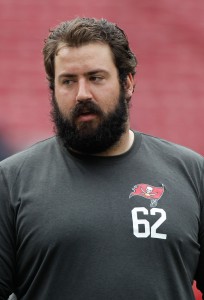 The loss of Smith comes at a bad time for Tampa Bay with left guard Kevin Pamphile and center Joe Hawley also nursing injuries. Both players were sidelined for Week 10 and it’s not immediately clear whether they will be in action for Week 11 against the Chiefs.

Hawley, 28, has only been so-so according to the advanced metrics, but he is the anchor for Tampa Bay’s O-Line and his tough, gritty style is missed on the field. If he remains out while Smith nurses his sprain, the Bucs will likely have to turn to Ben Gottschalk to bridge the gap. It also stands to reason that the Buccaneers could add an offensive lineman if all three players are ruled out for this weekend.

Previously known as Evan Dietrich-Smith, Smith de-hyphenated his name prior to the 2015 season. He discussed the change with Joe Kania of Buccaneers.com.