Receiving a four-game suspension earlier this week, Trent Williams will miss Washington’s November slate. But he contends the NFLPA did not follow protocol leading to this month-long ban, Liz Clarke, Mike Jones and Mark Maske of the Washington Post report. 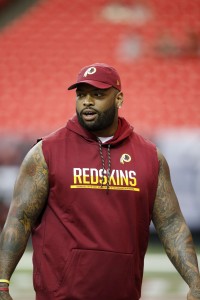 A conflict between the Redskins’ franchise left tackle and the NFLPA has emerged due to the proper steps not being taken in the leadup to to the ban. The seventh-year tackle, sources informed the trio of Washington Post reporters, is miffed the NFLPA accepted a four-game ban when other, less severe options, were slated to be on the table. Williams contemplated taking legal action, as he’s suspended without pay and will see his $11.25MM guaranteed base salary for 2017 become nonguaranteed as a result of this development, but it’s now too late to seek a suspension-stalling injunction.

While Williams doesn’t dispute the penalty was justified, he’s upset at the union failing to notify him of where he was in the drug program and the odd escalation of these stages. An NFLPA lawyer acting on Williams’ behalf in 2014 reportedly agreed to a sanction without knowing where the Redskins’ top blocker was in the drug program. This led to a step being skipped en route to Williams’ suspension, a sequence that has also irked members of Washington’s front office, per Clark, Jones and Maske.

The now-28-year-old tackle stood in the marijuana wing of the drug program, and in 2014 the league and the union agreed to more leniency as far as marijuana was concerned. An initial positive test for weed results in more frequent testing, with the second and third measures here being two- and four-game fines, respectively. However, a deal the aforementioned NFLPA attorney negotiated two years ago led to the four-game fine being bypassed and a suspension occurring earlier than it should have, the Post trio reports.

A positive test put Williams in the drug program, and a missed test triggered the second offense, but his side contends the former first-round pick was not given proper notification as to how close he was to a four-game ban. The four-game fine and four-game suspension became fused into one step, and Williams — who according to the Post was “stunned” to find out he was suspended — was apparently not informed of the NFLPA’s agreement. The mixup here will help lead to Washington being without its left tackle for a key portion of the schedule.

Williams also told the arbitrator assigned to settle this substance-abuse matter he informed the NFL he was on a trip to Africa when he was summoned for the drug test in question. This is Williams’ second four-game suspension for substance abuse, but with the previous ban coming in 2011, the four-time Pro Bowl left tackle’s record was expunged prior to this latest happening.

Pro Football Focus tabbed Williams as its top tackle thus far this season, and his absence obviously has the potential to wound Washington’s offense. He’s in the first season of a five-year, $66MM extension he signed to stay in Washington last year.