Jacoby Brissett is returning to practice today, meaning that he will be the Patriots’ player to be designated for return from the injured reserve list (Twitter link via Ben Volin of The Boston Globe). The Patriots now have 21 days until they have to put him on the 53-man roster or shut him down for the year. 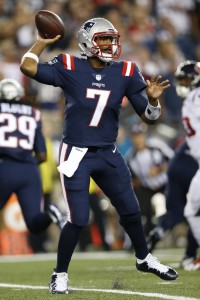 When Tom Brady accepted his four-game suspension for his role in the Deflategate scandal, the Pats were forced to turn to youngster Jimmy Garoppolo. When Garoppolo was taken out by a big hit from Dolphins linebacker Kiko Alonso, New England elevated Brissett to the starting role. Despite concerns that he was too green for the job – and that included ally Bill Parcells – Brissett was a solid fill-in. Unfortunately, he was slowed by a thumb injury and had surgery for it in early October.

The prevailing thought at the time was that Brissett would be stashed on IR with an eye on 2017. However, the Pats did not have a better candidate for return. Notables like tackle Sebastian Vollmer and Jonathan Freeny technically could have been brought back, but their respective maladies made that impossible.

This offseason, the Patriots could hypothetically trade Garoppolo to a QB-needy team and bump Brissett up to the No. 2 job behind Brady.