The Week 17 backfield for the Chargers will look somewhat strange, but that’s become the norm in San Diego this season. Kenneth Farrow‘s season will end on IR due to a shoulder injury, Eric Williams of ESPN.com reports. 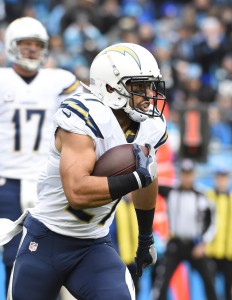 Farrow injured the shoulder in the Chargers’ loss to the Browns but returned to the game. His rookie season concludes with 192 rushing yards on 60 carries. A UDFA out of Houston, Farrow saw action thanks to numerous injuries to San Diego ball-carriers. Melvin Gordon‘s status has yet to be determined, but it would be surprising if the Bolts sent their starter back out there in a meaningless game against the Chiefs.

This makes three backs on San Diego’s IR, with Farrow joining Branden Oliver and Danny Woodhead. Dexter McCluster also sustained a non-football injury and is out for the season. Coupled with Gordon’s status, Farrow’s unavailability will leave Ronnie Hillman as the top able back for the Chargers, who are going to finish with back-to-back losing seasons for the first time since 2000-01. Andre Williams remains on the practice squad, so that is a move the Bolts could make to supplement Hillman if they hold out Gordon this weekend.

Farrow will look to secure a backup job next season. Woodhead is a looming UFA, Oliver will be an RFA, and Hillman will venture back into free agency as well, clouding the Bolts’ backfield behind Gordon going forward.

One comment on “Chargers Move Kenneth Farrow To IR”