Despite suffering a torn Achilles on Thursday night, Chiefs linebacker Derrick Johnson doesn’t have any plans to retire, as Ed Werder of ESPN.com (Twitter link). “I will play again,” said Johnson, who does plan to undergo surgery to repair the injury. 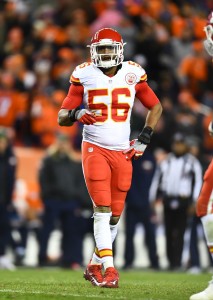 As such, the Chiefs could conceivably save as much as $4MM on next year’s cap by releasing Johnson with a post-June 1 designation. However, that scenario is unlikely, given that Kansas City is would still carry $3.75MM in dead money if they cut Johnson. Additionally, the 34-year-old Johnson is viewed as a leader of the Chiefs’ defense, and is still quite effective — Johnson has graded as the league’s No. 21 linebacker this season with a top-five rank for his coverage abilities, according to Pro Football Focus.

Chiefs coach Andy Reid, too, offered positive words on Johnson, and indicated that the veteran linebacker would return next season, as Paylor writes in a full article. “I want him around here — I don’t want him going anywhere,” Reid said. “I want him to hang around, do his rehab and get himself back to where he can play. But in the meantime, he can work on a little coaching there with some of our young guys.”

One comment on “Chiefs LB Derrick Johnson Not Considering Retirement”