TODAY, 11:50am: As expected, the Chiefs have placed Johnson on the injured reserve (via Terez A. Paylor on Twitter).

DECEMBER 9th, 9:27am: Chiefs linebacker Derrick Johnson has suffered a ruptured Achilles, coach Andy Reid told reporters on Thursday night. The injury, of course, will end Johnson’s season and the team will place him on IR. 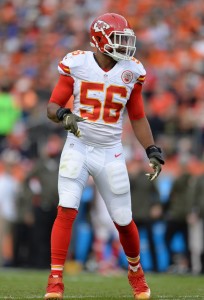 This isn’t Johnson’s first experience with a torn Achilles. He suffered the same injury back in 2014 and missed the majority of the season as a result. The good news is that he rebounded well, starting all 16 games in 2015 and totaling 116 tackles, four sacks, two interceptions and two forced fumbles. For his efforts, he was ranked as the No. 8 linebacker in the NFL by Pro Football Focus.

Johnson has been halted in the middle of another strong campaign – he is rated No. 21 amongst NFL linebackers by PFF with a top five grade for his coverage abilities. Now, the Chiefs will probably turn to 2015 fifth-round pick D.J. Alexander as a stand-in. Johnson will be sorely missed, but the good news is that the Chiefs’ D was able to hang on after losing him as they sealed a 21-13 win over the Raiders.

Johnson is tied with punter Dustin Colquitt as KC’s longest-tenured player. He signed a three-year, $21MM deal to stay with the Chiefs this offseason, so he should be under contract through the 2018 season.