When the Cowboys released Darius Jackson, the league took notice. The Browns, of course, used their top waiver priority to snag the rookie running back, but they weren’t the only team to put a claim in on him. The Eagles, Giants, and 49ers all tried to snag Jackson off waivers, according to Ian Rapoport of NFL.com (on Twitter). 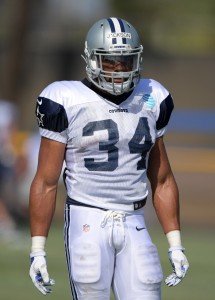 The Giants have had issues in the backfield all season long and there’s a lot of uncertainty about the position headed into next season. Rashad Jennings was initially brought to New York with the idea that he would be the team’s workhorse in the backfield. Instead, he has struggled to stay on the field thanks to various injuries. There has been talk about Paul Perkins, but he hasn’t gotten a lot of opportunities this year and he hasn’t done much with the few chances given to him. Bobby Rainey has been used as an effective pass-catching weapon and blocker, but he doesn’t have the makings of a No. 1 RB. Shane Vereen recently returned to action, but his status is up in the air after suffering a concussion. All in all, the Giants were curious to see what they could get out of Jackson and they were willing to either cut Rainey or carry five tailbacks to find out. Of course, given their record, the Giants faced long odds of landing Jackson.

While the 9-4 Giants are in line for a playoff spot, the 49ers and Eagles are pretty much playing with an eye on 2017. At 1-12, the Niners are No. 2 in waiver priority behind Cleveland. The Eagles, meanwhile, are no higher than seventh in the queue.

The Niners are currently carrying four running backs in Carlos Hyde, Shaun Draughn, DuJuan Harris, and Mike Davis. Davis, a 2015 fourth-round pick, may have been expendable given his lack of usage this season. In eight games this year, he has only 19 rushing attempts for 50 yards.

The Eagles are dealing with multiple injuries at running back. Recently, Wendell Smallwood was shut down for the year with a knee injury and Darren Sproles is in concussion protocol. If Sproles is unable to go against Baltimore this week, the team will start Ryan Mathews and use Kenjon Barner and the newly-promoted Byron Marshall in support. With a successful claim, Jackson could have slotted in as the team’s No. 4 RB with the Eagles attempting to sneak Marshall through waivers and back on to the practice squad.

Jim Thomas of the Post-Dispatch first reported that the Niners put in a waiver claim on Jackson.