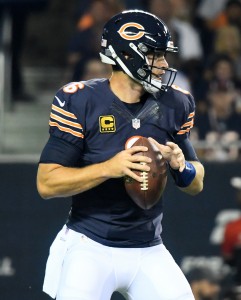 Today’s news might mean that Cutler has thrown his final pass as a member of the Bears. For months, we have been hearing that the Bears intend to move on from the veteran. Recently, however, Ian Rapoport of NFL.com reported that the Bears could circle back to Cutler if only because of the lack of options elsewhere. UNC quarterback Mitch Trubisky has gotten positive reviews from scouts, but overall this year’s draft class is lacking in options. In free agency, top available QB Kirk Cousins will cost a king’s ransom – that is, if he is even available. One has to imagine that the Redskins will retain him, either via a second franchise tag or a long-term deal.

Cutler’s season ends with a 59.1% completion percentage and a weak 4-to-5 touchdown/interception ratio.

The Bears are expected to continue with USC product Matt Barkley as the starting quarterback. David Fales, a 2014 sixth-round pick of the Bears who wandered around a bit this year, was recently welcomed back to serve as the No. 2 QB.