Lions cornerback Quandre Diggs injured his pectoral in Sunday’s game against the Saints and will likely miss the remainder of the 2016 campaign, freelance reporter Rand Getlin tweets. Diggs will undergo more tests on Tuesday, according to Dave Birkett of the Detroit Free Press (Twitter link), but Diggs’ outlook is “not looking good right now.” 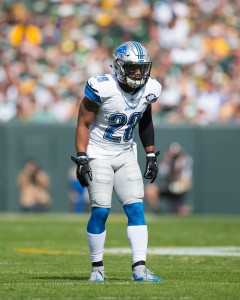 Detroit’s pass defense has been among the worst in the NFL this year, and in fact ranks dead last in passing DVOA, according to Football Outsiders. Specifically, the Lions rank 32nd against “other receivers,” per FO, which indicates that Detroit is particularly poor against pass-catchers that don’t rank among the top-two on an opponent’s roster — the exact players that Diggs had been covering as the club’s slot corner. Pro Football Focus, too, hasn’t been bullish on Diggs’ play, grading him as the league’s No. 105 CB among 122 qualifiers.

Still, Diggs has been available during his sophomore NFL season, as he’s appeared in all 12 games, posting 38 tackles, one pass defensed, and one fumble recovery while playing on 56.4% of Detroit’s defensive snaps. As Birkett writes in a full article, Diggs had been losing playing to safety Rafael Bush in recent weeks, while rookie defensive back Adairius Barnes figures to see more time going forward.