During the final days of the Gary Kubiak regime, the Broncos appeared pointed toward giving Trevor Siemian another chance. They are also reportedly Tony Romo‘s preferred destination if the Cowboys trade or release him. But Denver’s plan now is to turn the keys over to Paxton Lynch. 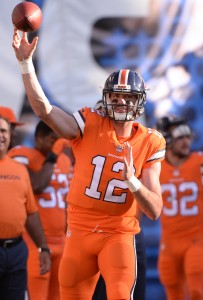 The Broncos hope to determine during OTAs and minicamp if Lynch has developed enough to be their starter next season, Mike Klis of 9News reports, adding the team wants to “do everything it can” to push him in his second year. Although the 2016 first-rounder struggled when summoned this season and will now have to learn a new offense after entering the league as a project, the Broncos remain convinced Lynch has the talent and character to make this ascent.

This would mean usurping Siemian, who should probably be viewed as the safer choice right now after starting 14 games this season. The Broncos will be pivoting back to an uptempo, aggressive offense under Mike McCoy after two years in Kubiak’s slower-paced, zone-blocking attack. So, that could point to Siemian being more apt to be ready. Both QBs completed 59 percent of their passes this season, but Lynch struggled in his two starts — against the Falcons and Jaguars — after playing well in relief of an injured Siemian against the Buccaneers in Week 4. Siemian underwent surgery to repair an issue in his non-throwing shoulder but is expected to be ready by OTAs.

McCoy successfully adapted his offense to fit the strengths of Tim Tebow in 2011 then incorporated plenty of Colts concepts in the ensuing Denver system to allow for a smoother Peyton Manning transition. Such experience should prove relevant as the organization attempts to push Lynch into a starting job.

Klis adds John Elway will not trade for Romo while he’s signed to his current contract. Romo’s $24.7MM cap hold represents the largest quarterback figure in the league for 2017. Regardless of whether he’s traded or released, the Broncos are not expected to make a run at Romo or any other sought-after veteran in free agency, Klis writes. The longtime Broncos reporter notes the team could pursue a veteran signal-caller. But it’s unlikely that player would interfere in the forthcoming Siemian-Lynch competition.

4 comments on “Broncos Want Paxton Lynch To Start In 2017”