Put another one on the board for Anthony Lynn. The Bills’ interim head coach is expected to interview with the Jaguars, a source tells Ian Rapoport of NFL.com (on Twitter). As shown on PFR’s Head Coaching Search Tracker, Lynn is also in the mix for the Bills, Rams, and 49ers. He doesn’t have an interview scheduled with the Broncos just yet, but that is expected to go down at some point. 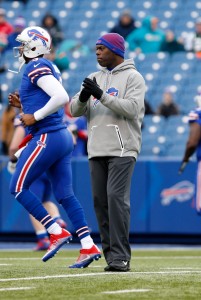 Lynn was reportedly a “virtual lock” to take over as the next coach of the Bills, but there’s now buzz that Lynn might not even want the gig. Lynn, 48, appears to have several options if he doesn’t want to remain in Buffalo. After Doug Whaley‘s bizarre press conference this week, it’s hard to blame Lynn for exploring other possibilities. The Bills have talent to win right away, but Lynn could find more stability in one of the other openings out there.

The Jaguars fell apart this year, but in the offseason they were picked by some to win the AFC South. On offense, Blake Bortles is something of an unknown after a down year and, once again, the Jags will have to figure out what to do at running back. Chris Ivory was brought in to hold down the position, but health issues limited him severely this year.

One comment on “Jaguars Expected To Interview Anthony Lynn”